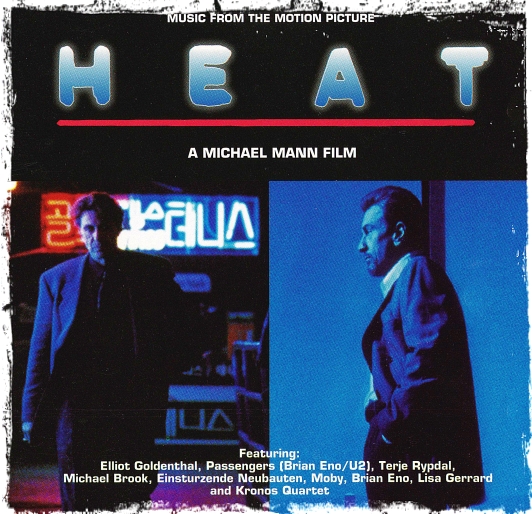 As far as this soundtrack, in my view Michael Mann’s masterpiece, is concerned it is really possible to talk about “Miscellaneous Artists”. To be true, it all began to find out the beautiful piece The Last Lagoon by William Orbit (famous English, electronic music producer and arranger) and after several years of searching I could understand, quite totally, the very core of this film music.
Michael Mann maximises the emphasising of the visual impact together with the sound one by drawing profusely from famous and brillant authors such as the Kronos Quartet and Elliot Goldenthal (Alien 3).
Other tracks are omitted in the score official version, maybe both for room and royalties reasons, but anyway used in the film.
It is specifically these latter that I am going to consider mainly by listing aside the context they have been matched with:

– Get Up To This – New world beat
(Vincent at the disco’s office discover who “Slick” is;probably the Disco’s Background music fading…)
– Gringatcho Demento – William Orbit
(background music when Waingro is looking for a job in a bar) – track from Strange Cargo III album
– The thrill is gone – BB King
(During the ball of Vincent and Justine…)
– Concerto for Violoncello and Orchestra Boulez conducted by Ligeti
(the Platinum robbery) track from the namesake album
– The Monkey King William Orbit
(Chris, Neil and Michael mislead the guard by gesticulating) track from Strange cargo III
– Arabic Agony James
(L.A.P.D. Smile!…a picture from above)
– In November – David Darling
(Neil finds out from some documents who Vincent Hanna is) track from Cello album
– Late Evening in Jersey – Brian Eno
(Chris and Michael in the underground car park hack into the computer altering the bank alarm /Charlene and Dominique ask for the police safeguard)
– Black Cloud – Steve Roach /Elmar Schulte performed by Solitaire
(Waingro meets Roger Van Zant/ Donald stops what he was doing…) track from Ritual Ground album
– Celon – Lisa Gerrard / Pieter Bourke
(News of the bank robbery on TV)
– Will Gaines – Eric Clapton
(Neil devises with Nate a new escape plan / Vincent and Casalas visit Hugh Benny)
– The Last Lagoon – William Orbit
(Vincent says about Neil: “… He’s is still here…”I feel it” … Neil runs after Eady on the hill at dawn)
– The Mighty Limpopo – William Orbit
(Chris understands Charlene’s wave and leaves) – track from Strange Cargo I album

The piece The Last Lagoon by William Orbit (taken from Strange Cargo II album) replace Run Up Hill scene written by Elliot Goldenthal and included in the official soundtrack.
The same is true for the track Refinery Surveillance (scene of the surveillance in the refinery) afterwards replaced by three pieces: The Monkey King by William Orbit, In November by David Darling mixed with Arabic Agony by the James, this latter is taken from Wah Wah album.
Celon by Lisa Gerrard is used in the film but omitted in the soundtrack edition; all the three pieces by Lisa Gerrard are included in The Mirror Pool album.
New Dawn Fades, a shorter, not sung version, is used during the motorway chase between Vincent and Neil and it is a remake by Moby of the namesake piece by the Joy Division; the song integral version is available in the album I Like to Score by Moby.
Armenia by the Einstűrzende Neubauten (taken from Drawings of Patient O.T. album) used for a few seconds during the first “sceptical” meeting of Neil and Eady will be present also in other ”Hard” parts of Heat as well as in “The Insider”; the piece Late evening in Jersey by Brian Eno has recently been recorded on a compilation of unpublished works called Curiosities Vol. 1 (Opal Records).
Top O’ The Morning To Ya written by Eric Schrod, Leon Demant and Willie Dixon is played by the House Of Pain (taken from the House of Pain album) and it is in background during the meeting between Vincent and the informer Richard Torena in the Disco Club; By The Time I Get To Phoenix written by Jimmy Webb is probably droned by Vincent Hanna during the informer Albert Torena questioning.
Will Gaines by Eric Clapton is a piece taken from the soundtrack of Rush, a 1991 film directed by Lili Fini Zanuck.
As far as Ultramarine by Michael Brook is concerned, there is a special, unreleased version used when Vincent Hanna, in an understandable fit of hysteria, throws away his TV set at a traffic light.
There are two versions of the End Title composed by Moby and called God Moving Over the Face of the Waters: the “soft” one included in the official CD and the one included both in the single That’s When I Reach for My Revolver God Moving Over the Face of the Waters Heat Mix and in the above quoted album I like to score.However, the one in the film is slightly different from both these latter.
The pieces composed by Elliot Goldenthal and produced by Mathias Gohl are listed below among the others; the composer has made use, for some pieces, of the collaboration of the Kronos Quartet, the contemporary string quartet already known for collaborating with Philip Glass and with the The guitar orchestra Deaf Elk leading Page Hamilton of metal band Helmet

HEAT B SIDE CDR This anthology was set using the music not inserted in to the original soundtrack record.Enjoy the Mixcloud 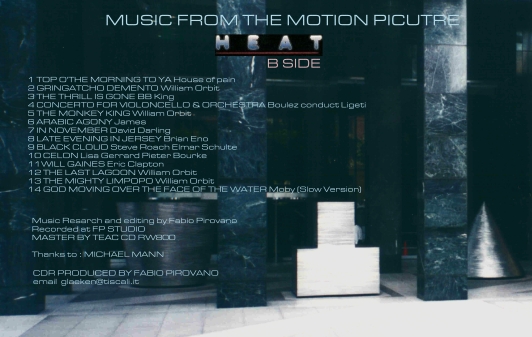 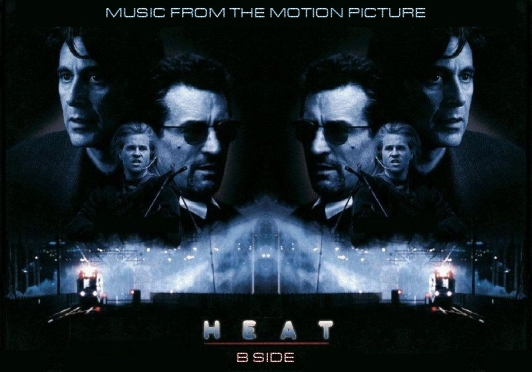 That’s one of most beautiful and moving song of this year,Richard God Bless you!